The OAS AMA | Art Museum of the Americas and the Permanent Mission of Peru to the OAS announce Fernando de Szyszlo: A Memory, an exhibition of work by the Peruvian master. This exhibition features works by Szyszlo from the AMA’s permanent collection, and archival papers and clippings documenting Szyszlo’s longtime relationship with the AMA. The exhibition opens to the public two days following the one-year anniversary of the artist’s death. However, rather than being a tribute exhibition assembled ‘in memory,’ this exhibit’s focus is ‘a memory,’ that of Szyszlo as documented and illuminated by his work.

Fernando de Szyszlo’s relationship with OAS art program dates back to the time of his first solo exhibition at the OAS art gallery in 1953. Szyszlo subsequently worked at the OAS as a consultant for the Visual Art Unit in 1958, and went on hold two additional solo exhibitions at the OAS AMA, 1985 and 1996. Ten of his works—murals, mixografias, and easel paintings—has found homes in the OAS art collection. This exhibition features seven of these works, a documentary film on the artist produced by the OAS Audio Visual program, and archival material on his solo shows at the OAS. Due in large part to AMA’s founding director José Gómez Sicre’s enthusiasm for Szyszlo’s work from the time the artist was barely known, and the long-term working relationship that the two shared, AMA’s art archives contain many rare materials that shine a light onto nuances of the artist’s life and career. AMA’s archives, devoted to the collection and preservation of papers and other records related to the art and artists of the Americas with particular focus on Latin American and the Caribbean, are generally accessible to researchers by appointment; for this exhibition, selected papers will be on view in the museum.

Szyszlo was part of the second generation of Latin American artists who traveled overseas, along with Mexican artist Rufino Tamayo and Colombian artist Alejandro Obregon, among others. His search for aesthetic identity was coupled with a dissatisfaction with imported modern art. As Thomas Messer explains, “Szyzslo belonged to that small group of artists who first did abstract art in the South American continent after World War II, and he was the first abstract painter in Peru in a time when abstract painting was not well regarded on his side of the world.” The impact of Tamayo’s work on Szyszlo charged him with an impulse to depict his own roots. During the time Szyszlo spent in Peru before going to Paris to study painting, he began to explore and incorporate depictions of Chancay tapestries into his work. There is little doubt that the artist represents a breaking point in Peruvian art history. Without hyperbolizing, there is much evidence to suggest that his work was the single most significant impetus for directions taken by the following generation of artists looking to reenergize modern art in Peru.

Fernando de Szyszlo, born in Lima, did not obtain his training from art schools, but rather in the progressive circles of Lima culture in the second half of the 1940s. Starting in 1944, his participation in the gatherings at the Librería Ayra and the Peña Pancho Fierro, his involvement in the editorial committee of the magazine Las Moradas (1947-1949), as well as his close relationship with the Agrupación Espacio—a group seeking to change the attitude towards architecture and modern art—were defining. Driven by these catalysts, Szyszlo began a quest to combine the expression of the native with a plastic vocabulary removed from a realistic conception and closer to the international avant-gardes. As a result of this search, he discovered the work of Rufino Tamayo in 1948 and began to explore the shapes and colors that revolve around the myths of the pre-Hispanic culture of Chancay on the coast of central Peru. The years he spent in Paris (1949-1950) were also crucial as he came into contact with other Latin American artists who shared his interests (Octavio Paz, Rufino Tamayo himself, and Alejandro Obregón, among others), as well as European artists who influenced his poetics (Breton and the surrealists) and style (Hartung and Soulages). Szyszlo’s art reached maturity within an avant-garde language, a lyrical abstraction, and a pre-Hispanic universe, which the artists considered to be “a second cultural source, different from that brought by the conquistadors.” He gained recognition in the 1950s as one of the key agents in renovating Latin American art and held several exhibitions, including one at the Pan American Union, which boosted the internationalization of his career. During that same decade, he received various accolades, such as honorable mentions at the São Paulo Biennials (1957, 1961) and his participation in the Venice Biennial (1958) in representation of Peru. Throughout the rest of his lifetime, he held numerous exhibitions around the world. Szyszlo and his spouse both died on October 9, 2017 in an accident in their home.

The AMA serves as the principal instrument of cultural diplomacy of the OAS. AMA’s mission is founded on the notion that the arts are transformative for individuals and communities. This guiding principle promotes the core values of the OAS by providing a space for cultural expression, creativity, innovation, dialog, and learning, while highlighting themes such as democracy, development, human rights, justice, freedom of expression, and innovation. AMA’s work draws on contemporary art to showcase a constructive vision of the future of the Americas via local and hemispheric cultural exchange.

Accessibility: This exhibition will be on the museum’s second floor, which is not accessible. AMA’s first floor is wheelchair accessible by appointment, with a ramp that can be installed at the back entrance to the museum. There is a gravel pathway leading to the back entrance. There is one half-step leading from the first room into the first-floor galleries. There is a flight of winding stairs leading to the museum’s second floor. Restrooms are located on the second floor. For more information on accessibility, or to make an appointment to visit, please contact 202 370 0147 or artmus@oas.org 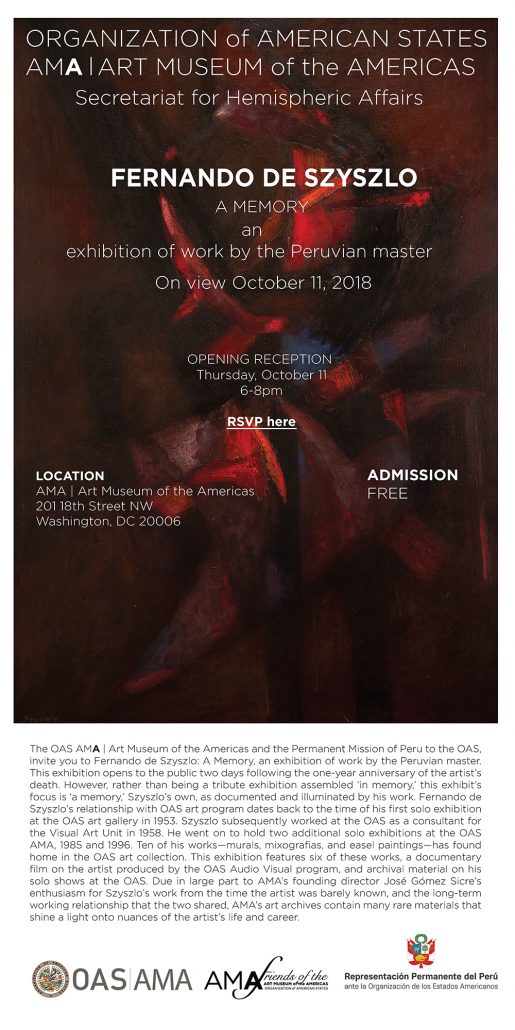